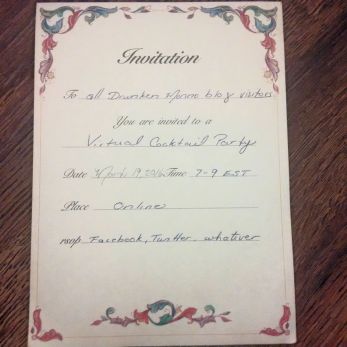 You, dear reader, are cordially invited to the 2nd ever Drunken Menno Virtual Cocktail Party. It will be held from 7-9 pm EST on March 19, 2016 on Twitter (#dmvcp2), Facebook, and right here in the comments section of the blog (though not this post — I’ll do one closer to the time for that purpose).

We did one of these last July  but there were a couple of hiccoughs with Facebook. I’m hoping to have the tech issues all worked out this time.

Here’s how it works. You make yourself a drink in the comfort of your home and then come online and join the party. Easy.

Folks in close proximity to me have asked why I do this as a virtual party instead of in person. There are several reasons for this: 1. I don’t have to clean the house; 2. I can involve people from all over; 3. I don’t have to spend the whole time mixing drinks for you; 4. no matter how much anyone drinks, I never have to take away car keys.

That’s ok. You don’t need to mix up one of my cocktails for the party. You can drink whatever you like — wine, beer, a mocktail, a glass of water, milk, apple cider. It’s up to you. Also, because it’s virtual, nobody will really know what you’re drinking. Pretend away.

But – just in case some of you long to enter the world of Mennonite cocktail drinking, I am today offering a few tips to help you make the leap.

Start with what you have on hand

I know you’re frugal and I understand the sticker shock when you’re standing awkwardly in the liquor store contemplating the various bottles of liqueurs and hard liquor mentioned in my recipes and hoping no one from your Church sees you (if they do, it’s ok. Invite them to the virtual cocktail party). Start by checking your shelves. Are you sure you don’t have something on hand that can save you a trip? Also, you don’t really need a fancy glass (unless you’re making the Mennonite Princess cocktail, which totally requires it).

Some cocktails are sweet like juice or candy, others are bitter, herbaceous, or spicy. I’ve covered most of those flavours but the vast majority of my cocktails are sour. Some of the flavour depends on the liquor base but the choice of mixer also matters. To stay frugal, you should stick to cocktails that don’t require that you buy things you won’t use again. Think of juice, milk or fair trade carbonated beverages. It’s ok to think of your own likes and dislikes. This isn’t about community discernment.

I’ve said this before. North American “Swiss” Mennonites are honouring their past when they drink rye whiskey. Russian and Prussian Mennonites have cultural resonance with brandy and vodka distilling. We all had brewers too, so, yes, go for that beer if you want. Matching with traditional Mennonite foods can be tricky, though. If you’re having a plate of verenijke on hand during the cocktail party, don’t pair that with a sweet or syrupy drink. Ditto shoofly pie.

Instead of a single recipe today, I’m offering up a couple of recommendations based on  Mennonite values like frugality and what I imagine might be in your cupboard.

You probably don’t have a cocktail shaker or a measuring glass. Not to worry. Any jar with a tight-fitting lid will work as a shaker. For a measuring glass, you can use a shot glass (note: these sometimes disguise themselves as toothpick holders in Mennonite homes). If you don’t have a shot glass, just eyeball it — 1 ounce is 2 tblsps or about 30 ml but the measuring doesn’t need to be that precise. For a not-too-strong cocktail, use 1 part booze and 2 parts mixer or whatever you like.

Rum is the sweetest of the common base spirits. If you have that bottle from your neighbours on hand and like sweet drinks, put 1 oz of rum in the bottom of a glass and top with some fair trade cola with a little squeeze of lime (cuba libre). Alternately, if you prefer a bit of spice, you can mix it with some fair trade or artisanal ginger beer for a dark and stormy (don’t use ginger ale). I’ve got some other rum drinks in my repertoire but they typically have one or two more ingredients.

You’re still holding onto some vodka from your years as a teen rebel; or you confiscated some from your own teenager

Vodka doesn’t taste like anything but alcohol. I don’t make a lot of vodka cocktails because of that. However, if you mix it with cranberry juice and a squeeze of lime, you get a Frugal Cosmopolitan (if you’re a Mennonite who travels, you are probably also frugally cosmopolitan). If you are a fan of vegetable juice, you can also mix vodka with tomato juice and a dash of Worcestershire, horseradish and whatever hot sauce you have on hand for something like a Bloody Mary. (Note: if it’s a vodka cooler you confiscated from your teen, just pour that sucker down your drain. You don’t want to know what’s in that.)

You’re still baffled by that bottle of whiskey gifted you from your co-workers when you left that job where no one really “got” you.

If they gave you a good quality Scotch, you are meant to drink that unmixed. Otherwise, make yourself a cocktail. Some people say that whiskey is an acquired taste but I have not found anyone who dislikes a whiskey sour. It’s also easy to make. Remember – simple syrup is just equal amounts of sugar and water heated until dissolved and then cooled. The egg white’s optional. Whiskey is also often the base for cocktails that swing to the bitter end of the flavour wheel but those ask for the addition of another liquor — campari or vermouth — and you likely don’t have those filling up space under your sink.

After you kindly helped a friend clean out their dead relative’s apartment, you accidentally inherited a bottle of gin or tequila

A Margarita’s easy and it’s basically a sour made with tequila. I have quite a number of gin drinks in my repertoire but if you’re looking for something simple and cheap, just pick up some fizzy water, lemon and simple syrup and make a Tom Collins (or a Dirk Willems). If you’re feeling fancy, splurge on a bottle of bubbly and do a Conscientious Objector instead.

You were swept up in a wave of baking perfectionism and bought an unusual liqueur or brandy imagining yourself entering the Baking Big Leagues.

This one’s a bit tricky. If it’s a sweet liqueur like creme de cacao or creme de menthe, just add milk for a dessert cocktail. As for brandy or a citrus liqueur, I say plop it in a glass with ice or, well, wait for someone to give you a bottle of gin or wine or something so you can make a proper cocktail. And keep scouring my blog — my liquor cabinet and baking cupboard are besties. If you’ve baked with it, I’ve probably drunk it.

*This title is sort of a rip-off of the very funny but not at all Mennonite blog by Ross Murray. Spend some time on google and you can find all sorts of other drinking tips that will tell you how little you should drink, what you may or may not like, and how to avoid and/or cure a hangover. Go ahead and read those sites but you should be aware that their tips are more worldly than mine.

2 thoughts on “Drinking Tips for Mennonites*”