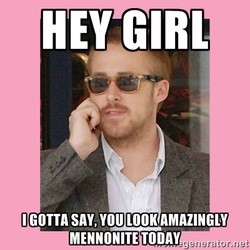 I posted this last spring on the old site. It quickly became my most shared blog post, and not just because I send the link to every teenaged girl on Twitter who complains about an outfit making her “look Mennonite.”

About 5 years ago, I was sitting in a restaurant nearby and overheard a man at the next table describe a woman by saying, “you know, she looked kinda Mennonite.”

It wasn’t a compliment.

It surprised me. It was the first time I heard the word Mennonite used  to insult a woman’s appearance. By a non-Mennonite at least. It’s different within the Mennoverse, where I’d grown up with an older brother and boys in the community who disparaged us all with “jokes” and insults typical of older brothers and teenaged boys lots of places.

Fast forward to 2014 and the movie Gone Girl had the memorable line in it, “Now she looks like a fucking Mennonite.” It was spoken disparagingly by the villain of the film, no one we are meant to take as a role model. Still, since that movie came out, I  noticed a rash of tweets with young women asking whether they looked Mennonite, stating that someone else said they looked Mennonite, or even self-defining themselves as “looking Mennonite.”

None of them seem to think it’s a compliment.

The thing is — I’ve always known that I looked Mennonite. I look so Mennonite that I could move to Steinbach and no one there would even notice. They’d just start talking plautdietch to me on the street and assume I’d lived there forever. It’s not the clothes; it’s the genes. See, my particular ancestry saw a smallish community of Mennonites from the Netherlands move en masse to Prussia and then an offshoot of that community moved, en masse, to Russia, and then an offshoot of that community moved, en mass, to Canada. If you married out, you left the community. I’m sure there were a few secrets hidden away behind the legal patronym but for the most part there wasn’t a whole lot of outbreeding.

It’s a vaguely Germanic look. To most people in North America, we just look like any other white people but if you plopped one of us into a crowd of Irish and Anglos and asked me to play a Mennofied version of Where’s Waldo (where’s Menno?), I’d win every time. It wouldn’t be so easy if you added people of Dutch and German ancestry to the crowds, but I’d still be game for a try.

A few pointers in case you ever want to play. We have round faces and there’s a little bulb at the end of the nose and another on the chin and each of these grow more pronounced as we get older and/or more dogmatic. Our lips are thin and made for pursing in judgement. I think over the past four hundred years we hastened evolution along by kicking all the thick-lipped out of the gene pool (probably by shunning). Some of us are blonde and some are brunette; when auburn shows up, we know that a little more outbreeding happened.  Our eyes are a bit on the small side and they are spaced just wide enough that there’s a bit of a sheep-like look in them. It doesn’t matter if we are trying for sardonic derision, playful flirtation or combative challenge, our sheep’s eyes always give us a look of gentle passivity.

I’ll warn you only once — don’t trust a Mennonite by the look in their eyes.

But that’s only my little corner of the Mennosphere. Globally, way more Mennonites don’t fit this genetic profile than do. There are over 200,000 Mennonites in Ethiopia and those Mennonites don’t look like me very much at all. But the context of the Gone Girl quote is Illinois and I suspect that most of the twitterverse comments are also American. That means that they were probably not thinking of the Ethiopian Mennonites, or even the Low German speaking Mennos like me who came through Russia. Instead, they were thinking of the Pennsylvania Dutch kind of Mennonites or the “Swiss” as my people like to call them, and mostly the Conservative or Old Order branches of the Church. There are actually a certain number of Russian Mennonites in Illinois but still, I don’t think that the Gone Girl character was commenting on a sudden development of sheep-like eyes.

In the context of the film, it is actually pretty clear what is meant by “look(ing) like a fucking Mennonite.”  The villain of the tale is complaining about a girl who transformed herself from a sexy temptress into the most chaste, innocent and purest version of womanhood possible — a Mennonite.

Apparently, a woman who looks like a Mennonite is the very antithesis of sexy. Older brothers all over Mennoland are high-fiving each other right now over this bit of news. They now have a film villain to agree that we Mennonite women are not just not sexy; we’re anti-sexy. Mind, I know there are worse stereotypes out there and there are actually women in my acquaintanceship who have no problem with this and are quite pleased with “chaste” as our public image. It could be worse. Nobody ever suggests that looking Mennonite is “asking for trouble.” No girls are ever sent home from school for looking too Mennonite.

But, you know. I didn’t really choose to be anti-sexy. I haven’t done a rigorous study but the Mennonite women I know have as diverse sexual likes and dislikes as women outside of the Mennoverse.  Some of us are sexy, some of us, less so. We’re not all that vocal about sex, many of us thinking that it’s no one’s business and that the Church hierarchy ought to just stay out of the bedrooms of the congregation (And everyone else too — get out of our bedrooms, you fictional psychopathic film villains!).  But that doesn’t mean we’re not sexy. After all, what could be hotter than adult baptism and earnest discussions about peace, justice and community-mindedness?

That’s a rhetorical question. Get yourself a drink and rethink answering that one.

No, really. Don’t answer it.

Throw all the ingredients but the garnish into a cocktail shaker. Shake vigorously. Strain into a cocktail glass. Drink in awareness that you are every bit as sexy as this drink. Unless you don’t want to be sexy. Then there’s nothing this drink can do to damage your chaste reputation.