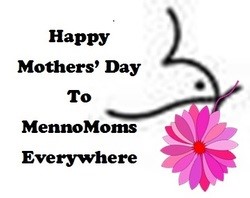 This post first appeared for Mother’s Day, 2015 but I think the reflections are mostly still relevant.

A number of years ago, one of my fellow graduate students called me a supermom. The statement was woefully misguided. Not only would my academic career soon crumble into a worse mess than that found under your average toddler’s high chair, I never came all that close to living up to the Mennonite ideals of Motherhood. But my fellow student wasn’t to know that at the time. The baby was only a year old, my career looked promising, and the speaker wasn’t a Mennonite.

In popular parlance, a Supermom is a woman who achieves both maternal and professional ideals. A SuperMennoMom is a little bit different. She, too, embraces intensive mothering with a passion but she has the option of replacing some of her professional goals with Church work. Well, it’s not really an option; professional work — work for pay — is optional. Church work isn’t.

Supermomdom isn’t anything new among Mennomoms. I recently saw a suggestion that Anabaptists may have been the first “helicopter parents,” stressing over the upbringing of their kids back in the sixteenth century while their Catholic and Lutheran neighbours benignly neglected theirs, confident that infant baptism had washed away Original Sin and everything else was just nuisance and bother.  Anabaptist parents, on the other hand, knew that when their child reached the age of accountability, their whole Church would be looking at their child’s decision and crediting or blaming the parents for the kid’s commitment, or lack thereof, to Christ and community. The child’s salvation, and the parents’ reputation, depended on their diligent nurture, guidance and discipline. Even today, plenty of Mennonite parents feel they have failed in some way when their adolescent children postpone baptism and their adult children leave their congregations. That’s a lot of pressure.

You might be wondering whether I ever actually tried to be a SuperMennoMom. Perhaps you think I was probably more going for drunk mom. Or blasphemous mom. Or some combination of them. Truth was, like a lot of moms out there (Mennonite or not), I was just stumbling along doing what seemed like the best thing at the time. Not really drunk most of the time, though it’s possible more alcohol would have helped. And it turns out that, even if my heart wasn’t always in it, I did do a lot of the things that might have given me some status in the SuperMennoMomdom if only I had cared more.

A SuperMennoMom raises her children so that they can barely imagine living outside of a Mennonite Church community. Or, if they imagine it, they imagine it with horror. I could have worked harder at that.  True, I took my kids to Church and Sunday School, arranged play dates for with fellow congregants’ children, and encouraged them to invite their non-Mennonite friends to Church events. I sat on committees and modeled community-building and hospitality. But a real SuperMennoMom would have taught Sunday School, cooked  from the More with Less cookbook and brought her family to every potluck and Sunday School picnic. A SuperMennoMom always stays to help with the dishes afterwards.  I missed a few. Still, I took the kids to their fair share of potlucks so I don’t think I deserve an outright or epic Fail; maybe a C- and a few notes on the report card about working on my attitude.

In addition to their Church work, some SuperMennoMoms choose either by inclination or financial necessity to work for wages. This is controversial in some branches of the Church. A true SuperMennoMom, however, surpasses any controversy and manages to succeed in whatever career she pursues without sacrificing Church or child rearing responsibilities. And if she talks about her career, she should be able to mention its social usefulness. Some SuperMennoMoms find employment in the Mennonite Church infrastructure itself which is always useful. For those of us in the more liberal Churches, it’s also ok to be an academic, especially if one’s field of study is Theology, Peace and Conflict Studies, or Anabaptist History. I was, as I’ve said, a failed academic when my kids were small and unintentional unemployment doesn’t really match with anyone’s ideal, let alone a Supermom’s. No passing grade for me there.

A Supermom manages her children’s schedules. For most Supermoms, this means planning, tracking and taking the kids to soccer practice, medical appointments and school obligations. For a SuperMennoMom, it means all that, plus Church and music.  After the fear of raising a child who leaves the Church, the SuperMennoMom’s second greatest fear is raising a tone-deaf child. A SuperMennoMom won’t stop loving her child if s/he shows no interest in piano lessons and/or joining a choir and she’ll do her best to hide her disappointment, but we all know it’s there. Still, as long as the kids can sing in four-part harmony and know a couple of hymns by heart, I figure that all is not lost. My kids lasted a couple of years in piano lessons and the same in a local choir. They’re no virtuosos but they don’t embarrass themselves when it’s time to sing the Grace before meals at Mennonite events. I’ll give myself a C+ on that one.

At home, the SuperMennoMom shares a number of characteristics with Supermoms of other faiths. Both, I understand, bake a lot of cookies. SuperMennoMoms often bake their own bread, but this isn’t unheard of in non-Menno Supermomdom either.  A SuperMennoMom will make a number of traditionally ethnic foods while also being sure that her children understand that one does not need to be of a particular ethnicity to be a Mennonite. She will teach her children to cook and to bake.  I did that, sort of.  I wasn’t as good at the rest. A SuperMennoMom prays before meals and at night and reads her children Bible stories. Between these efforts and Sunday School, her children should have a solid knowledge of the Bible by the time they hit high school. When I visited an art gallery with my fourteen-year-old and she pointed to a painting of Adam and Eve and asked what it was about, I knew I had failed as a SuperMennoMom big time.

As far as life failures go, I’m actually finding that I can live with this one just fine.  My children are grown up enough to know that they can blame me for whatever failings they like, and I am old enough to know to ignore that, recognizing that they would but have found different complaints had I been a more contented denizen of the SuperMennoMomdom. And, anyway, motherhood isn’t done yet.  To make up for my many past failings, I am now committed to teaching my (adult) daughters the fine art of cocktail mixing. Not part of the traditional Mennonite mothering lexicon, to be sure, but there are times in life when one needs to improvise.

To honour SuperMennoMoms this week, we have superfoods in this cocktail — pomegranate juice and blueberries — along with vodka, gin, grenadine, an orange liqueur and a dash of bitters. 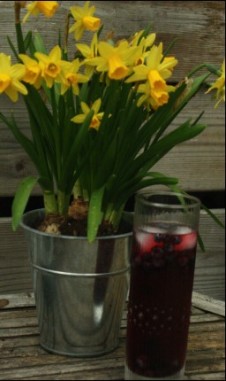