The Mennonite world was not overwhelmingly delighted when Rhoda Janzen’s Mennonite in a Little Black Dress was published in 2009 and began climbing the NYT bestseller list.

Mind, I can’t think of anything for which the Mennonite world has ever been overwhelmingly delighted. We tend not to do “overwhelming.”

I mean, we were all pretty chuffed when the Lutheran Church apologized for having tried to stamp us out in the  16th and 17th centuries but “overwhelmingly delighted” is probably an exaggeration for that was well.

The people  most bothered by Mennonite in a Little Black Dress, I understand, were those from her hometown of Fresno, California. For them, it was personal. But they weren’t the only ones. Many a Menno had many a quibble over the generalizations and less than favorable representations of our people presented in the memoir.

This is hardly surprising. It fits, in fact, within the strong tradition of Mennonite literary criticism that revolves around various manifestations of the question: What if everyone now starts to think that’s what we’re really like? Representatives of this school of criticism can be counted on to rise up whenever a work of literature features Mennonites.

The people of Fresno can join with the Steinbach Mennonites still offended at Miriam Toews and also harken back to their Manitoba predecessors who objected to the unflattering portrayal of Mennonite leaders in Rudy Wiebe’s earliest work. I’m sure there are more. These are just a few of the more famous examples.

It is probably true that non-Mennonite communities would react with similar vigour to the sense that their own communities were being disparaged. But I can’t help thinking we’re just a tad  more sensitive than the run of the mill conservative religious ethnic community.  Or maybe our reactionary literary criticism posse is just better organized.

Chief among the critics of Rhoda Janzen’s Mennonite in a Little Black Dress is Rhonda Langley who wrote Mennonite in Blue Jeans as a rejoinder to MLBD. While most critics limited themselves to grumbling among themselves or writing reviews for the Mennonite press, Langley wrote and self-published a whole book in response, demonstrating through her own life story, that not all Mennonites were like those portrayed in MLBD.

Subtitled, A Memoir of Coming Home, MLBD recounts the author’s experience returning to her Mennonite parents’ home in Fresno, California after the dissolution of her marriage. As any number of reviews will tell you, it very skillfully weaves together the story of Rhoda’s reflections upon her return to the home of her parents, her memories of growing up Mennonite, and  the story of her marriage falling apart. Even Langley agrees that the memoir is a pleasure to read but, like many before, bemoans the image of Mennonites at the memoir portrays.

A good deal of the humour in MLBD derives from the eccentricities of the author’s family members. Some of these are clearly particular to the family and others blend into a caricature of the faith/ethnic group. The humour builds on stereotypes that we Mennonites have known all our lives, and the jokes feel familiar. They focus on our famous frugality, bad fashion sense, and our apparent aversion to all things pleasurable. She also has some things to say about our traditional foods.

Everyone can agree that Janzen’s book committed the venial sin of glossing over the distinctions between different types of Mennonites. With her own ancestors having immigrated from Russia in the 1870s, Janzen provided a clever account of bits of the history of Mennonites in Russia but she apparently forgot about the Mennonites who migrated from South Germany and Switzerland and settled in the Eastern USA well before her own ancestors. She also failed to explain the distinctions within the groups of Mennonites from Russia.

This sin, of course, is not Janzen’s alone. Faced with the dizzying array of sectlets in our faith group, it is rare to find a writer who does justice to the distinctions. Langley tries, but even she divides us into two groups and claims that the Russian Mennonites are Mennonite Brethren (mostly) and the Mennonite Church USA are Swiss Mennonites (mostly). Which mortally offended every former General Conference Mennonite of Russian Mennonite heritage who read her book (and Berghthaler Mennonite, and Sommerfelder, and Old Colony, and…).

None of the critics of MLBD can really deny that there is a certain strain of frugality among a good many Mennonites. Most of us have stopped re-using the same tea bag over the course of a week but we don’t really approve of reckless spending or conspicuous consumption.

Over the years, some branches of the Church (like Rhoda’s siblings in MLBD) have become more comfortable with spending money while others (like Rhonda in MBJ) have wholly embraced frugality as a way of “Living More with Less.” It’s a different kind of frugality than a generation ago, one that involves less McDonald’s coffee and more lentils, but it is frugality nonetheless.

Rhonda Langley, by her own admission, has no little black dress in her closet  but she gamely came to our defense, claiming her own preference for unfashionable jeans to be a choice of convenience and comfort, nothing doctrinal. I do think we need to concede, though, that as a general rule, we Mennonites aren’t all that up on fashion. There are exceptions, but they prove the rule.

Here I join the legion of critics and insist that both Rhoda and Rhonda have got it wrong. Rhonda talks about quesadillas and insists that being Mennonite isn’t really about the food. She hammers this point home by consistently misspelling Borscht throughout the book, as if it just shouldn’t matter.

Rhoda Janzen’s spellings are correct but I read about the foods of her memory with bafflement and took down my copy of Mennonite Foods and Folkways for some serious fact checking.  Here, I learned both that Rhonda’s spelling of “Borsch” was as wrong as I thought, but that Rhoda’s insistence that true Mennonite Borscht had beets and vinegar was completely wrongheaded. Voth’s definitive book of recipes and anthropology includes several recipes of Borscht, beets and vinegar completely optional (tomatoes and dill universal).

When we Mennonites adopted the word borshch into our Low German language, we added a “t” and capitalized the word. Borscht became a Low German noun. We adopted the Borscht in which the main ingredient is cabbage — not beets (p.178)

It’s important that I correct the record here. I wouldn’t want everyone who read these two books to think that we Mennonites are all beet borshch eaters.

A Generalized Lack of Fun

We are a people known for sexual and emotional repression. MLBD  portrays Mennonites as people who neither drink nor dance (except for liturgical movement), who don’t play cards and who disapprove of vanity, higher education, and sex. And yet. This life of prohibition was clearly more alive in Rhoda’s past than in her return to the land of her childhood where now she drinks wine with her theologian friends and attends her niece’s dance recitals.

The past and present in Rhonda Langley’s Mennonite in Blue Jeans have neither the list of prohibitions nor  the hint of present-day hedonism that Rhoda conveys. There are meaningful moments and everyday pleasures but not a lot of that wild sense of abandon that merits the description of fun. Even her utopian Mennonite future imagines the contentment of social and environmental responsibility without a lot of exuberance.

Well, maybe once we loosen up after a drink or two. 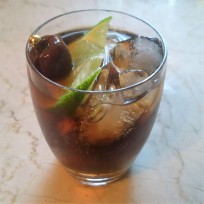 Combine the cola and creme de cacao by gently stirring in the glass. Add ice. Garnish with wedge of lime and cocktail cherry. Drink and let loose.