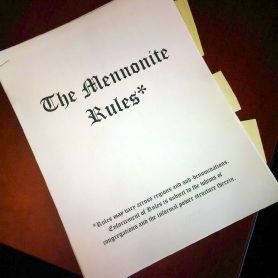 Growing up in a Mennonite community, when it came time for my adolescent rebellion, I had it pretty easy. My wild rebelliousness consisted of such rule-breaking as playing cards in study hall and hosting a square dance (once).

Yup. I was one badass Menno rebel.

I expect that wherever two or three are gathered, there will be rules made and rules broken. I’ve heard it suggested that we Mennonites are moving away from being a rule-based culture and that this is part of a “post-modern shift.” It’s possible, but I’m a little too Ecclesiastes 1:9-10 to believe that a push and pull between rule making and rule resisting is entirely new. I suspect that we’ve always had those among us who like to order their lives with clear and simple rules and those of us who, well, don’t.

Which isn’t to say that any of us are completely consistent about our preference for rules or no rules. I, for instance, am pretty strict in insisting that some cocktails should be shaken and others stirred. I’m also kinda rigid in following the official rules for Dutch Blitz and the version of Rook rules that I learned at the knees of my family elders.

Yes, yes. There are rules that shouldn’t be broken.

I’m less of a fan of rules to run my life. For the real life choices, I prefer broad ethical principles – you know, the kind that make me search the city for fair-trade cocktail supplies. It’s true that sometimes my way makes for a big fat ethical wet blanket on the enjoyment of life but at least it’s not a stupid rule imposed just because.

As a group, we Mennonites also have our rule preferences. We’re mostly ok with being guided by general ethical principles for things like personal economic choices. Stewardship’s important and all but no one’s going to lose a job or Church membership if they buy non-fair trade chocolate or spend too much on their house (anymore).

Rules about marriage are a different matter. A lot of Mennonites are pretty serious about those. These rules – the ones held by the largest Mennonite denominations – are actually pretty similar to mainstream North American social norms of the early-mid twentieth century. We like to think that we’re counter-cultural – a sort of people apart – but we’re not always.

In case you weren’t around, here’s a little recap of the Mennonite rules of marriage.

1. No sex outside of marriage

We’re vague about the definition of sex and encourage an expansive understanding – one that includes dancing, for instance – just to be on the safe side. We used to publicly shame couples who were found to have broken this rule. We don’t do that anymore but that doesn’t mean we’ve eliminated the rule. People break this rule and we know it. We just don’t talk about it a lot.

2. Romantic couples should not share living quarters unless they are married

Young people get around this one by living in intentional communities or just houses with lots of roommates who are presumed to surveille them to assure no breach of rule #1. Older couples with the financial means to do so typically maintain separate legal residences for the sake of the Church directory.

This rule follows pretty logically from rules #1 and #2. My non-Mennonite friends are fairly universally appalled when they hear that Mennonites still often marry when we are barely out of our teens, seeing in it a sign of rashness and/or pressures towards child marriage. Still, this is what we do. We recommend a big Church wedding. Be sure The Servant Song is sung there. People sometimes break this rule, too, either by delaying marriage or not marrying at all. This causes a certain amount of consternation but there’s not much we can do about it.

4. Be a good Church couple

A good Church couple makes the Church the centre of their marital and family life. They love and are good to each other (and other people) always. They might attend marriage enrichment weekends from time to time. People have broken parts of this rule for a very long time but before the 1970s, they mostly just hid their misery. Since then, we have developed some new rules to deal with marriages that need to end.

Should a couple fail in upholding rule #4, they should separate amicably, and spend several years grieving the broken relationship. They should demonstrate powerful emotions of pain and sorrow at their broken covenant regardless of whether these emotions reflect their experience ending the marriage. Regret should focus on the breaking of the covenant, not on it having been engaged in the first place, in accordance with the old Mennonite saying:’Tis better to covenant and fail than never to have covenanted at all.*

We’re ok with remarriage. Courtship for subsequent relationships should follow all of the above rules (with the obvious exception of #3). Nothing warms the cockles of our Menno hearts more than seeing a middle-aged or older adult slowly emerge from a two decade-long period of mourning and regret, and tentatively start loving someone new.

There was a lot of hoopla and self-congratulations after passing that ultra-vague resolution in Saskatoon this summer in which we opened ourselves up to accepting LGBTQ Mennonites as legitimate members of our community. Or at least, not expelling congregations who do. Nonetheless, I maintain that it’s a hollow kind of inclusivity if it is bound up in rules of behaviour, pasting rules of behaviour that don’t work all that well for heterosexual couples onto the newly-included.

Personally, I think we do better with broad ethical principles to govern healthy and life-giving romantic relationships: reciprocal respect, honesty, care, kindness. That kind of thing. Doing so casts a shadow over some of these rules — it is possible to follow the rules without abiding to the general ethical principles and it’s possible to abide by the ethics without following all of the rules.

But casting aside the rules causes problems. For one thing, it makes it much more difficult for us to pass quick judgement on each other’s lives and relationships. Which is, of course, one of our traditional pastimes.

And also, a lot of people love rules and find comfort in them. I’m not here to take comfort from anyone. After all, I hope to offer comfort in a glass with every blog post. But I gotta wonder whether the comfort that we offer to the rule-lovers among us is hurting others.

There aren’t any rules, as far as I am aware, for the honeymoon. Those couples who 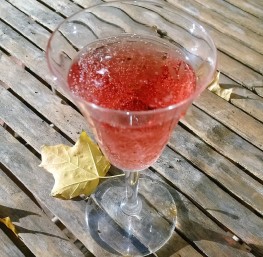 actually follow rules 1-3 could probably expect a bit of pain and disappointment but this cocktail ignores all that. It’s a mead cocktail since mead has ancient connections to newlyweds and throws in some raspberry simply because of all the Mennos I’ve known, I have never known one who didn’t like raspberries. It’s not as Mennonite as rhubarb, perhaps, but there’s time enough for bitters and bitterness in the long years ahead.

Mix the mead and the chambord in a glass (stir). Top with sparkling wine. Share with spouse while jointly ruminating over all th rules you hav and will break together.

*Not really an old Mennonite saying.

2 thoughts on “Breaking the Rules”