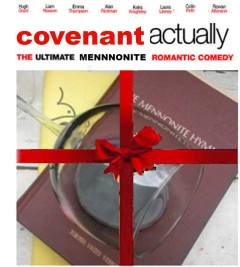 When I married outside of the fold, I discovered something new: turns out a large segment of the Canadian population regularly watches movies around Christmas time.

It was like a brand new world opened up in front of me.

Despite my liberal upbringing, extensive movie-viewing had never been a major part of the holiday season through my childhood and youth. This wasn’t in objection to the worldliness of Christmas movies. With their transparent moralism, they’re actually the kind of movie that would usually gain our stamp of approval. But between choir practice, baking marathons, Church community-building events, Handel’s Messiah, and a minimum of fifteen family dinners, we were lucky to find the time for watching the briefest of all Christmas TV offerings. And we’d only do that while finishing up our DIY Christmas gifts.

Now that I’ve discovered the Christmas movie phenomenon,though, I feel the need to incorporate them into my traditions. I just wish they were a little more Mennonite.

I don’t think this is an impossible wish. Although film-making is not one of the top ten most popular Mennonite career choices, I am betting there are at least a couple Mennonite film-makers out there.  I just need them to realize their calling and start churning out some Menno re-makes of the classics. I think it’s time for such films as Meet Me in St. Jacobs, It’s a Vonderful Goot Life, and Miracle on the 34th Concession.

The remakes will also need a bit of fine-tuning. In It’s a Vonderful Goot Life, George’s brother will not be a “war hero” and we’ll want to replace all that dancing in any of the movies with volleyball or Dutch Blitz tournaments.

Also, you know that movie, A Christmas Story? The one with the kid rigid in a snowsuit and dogs running away with the turkey? We’ll want to change the phrase, “you’ll shoot your eye out,” which is spoken several times to veto a toy gun for the protagonist’s Christmas present. Vetoing toy guns is all well and good but not just for fear of self-harm. So, we’ll change that to “you’ll grow to normalize gun violence and the military-industrial complex.” Also, the kid won’t get the gun.

But, what of the holiday romantic comedies, you ask? The romcom is another genre of film woefully lacking of Mennonite content (though I understand that the Hallmark Channel has aired a few Bonnet-Ripper adaptions). Where, I ask you, is what would surely be an instant classic – While You were Schputting, a film in which a young woman saves a stranger’s life and falls in love with him despite his incessant and sometimes insensitive teasing?

And, of course, I am also awaiting with bated breath for the re-make that will take the world by storm: Covenant, Actually. This opens with a view of a Mennonite Assembly and a voice-over declaiming at how cynics think no one respects covenants anymore but they actually are all around you, if you look for them. The film follows with a series of vignettes of people and groups who covenant with each other. It’s all very heart warming. And, yes, they will use the word covenant as a noun and as a verb.

Once we’re done with all the re-makes, we might come out with an original holiday flick or two. I have in mind a plot for The Great Canadian Mennonite Holiday Romcom.

It starts on Christmas Eve, of course. We have shots of two different services and two different pastors, both women, both middle-aged. One wears a stole and the other wears street clothes. One of the Churches is a bit more ornate and has the national flag hanging. The other is simpler in design but it still has a Christmas tree and the mostly white, middle class and middle-aged congregations are both dressed in their Sunday finest.

Because it’s a comedy, we’ll want a mishap in each of the services – maybe a scripture reader pauses too long during a well-worn passage; maybe the pianist keeps playing the carols out of order.

The services end in parallel and the two pastors leave. We see the names of the Churches as they leave – one is the United Church of Canada, the other Mennonite. Both pastors seem a little bit melancholy as they make their way home. The Mennonite pastor walks home with her husband but they are distant to each other, like friends, not lovers. The United Church pastor walks home alone.

That’s the setup. The two pastors are friends who will discover, while walking through a winter wonderland later on, that they are in love with each other. You would think that the United Church pastor would have seen this coming since she left the Mennonite Church years ago after coming out as a lesbian. But she is almost as floored as the Mennonite pastor who had, until that moment, seen herself as heterosexual.

It’s a dramatic scene and romantic. It’s also rife with comedy. The audience will want them to fall into each others’ arms but instead they recoil with shock and panic. And because they’re both pastors, they’ll pray. The whole movie will probably have a laughable amount of prayer.

The comedy ramps up a level once the Mennonite pastor starts coming out to her seemingly progressive congregation. Because the movie’s a romantic comedy, the audience will know from the start that love will prevail. That’s a given in the genre. But that doesn’t mean that there won’t be trouble. The Mennonite congregation will be divided. There will be squabbling – lots of it – over questions of morality, leadership, and what the neighbouring Churches might think. Some of that might be cringe-worthy. And some of it would be hurtful if it happened in real-life instead of in the confines of a feel-good movie. Happily, all of the judgement and upset will be interspersed with scenes of a beautiful mid-life love story.

Altogether, it’s a story about a community or institution being faced with a wild, overwhelming force of love, and being powerless in the face of it. Oh, the community could punish the pastor as an employee of the Church and some will want to do so, but the audience knows that punishment is meaningless in the face of love, even as various members of the Church lash out and try their mightiest to push back against the tide of the romantic narrative.

That’s not all, of course. There’s also the hypocrisy whenever progressives find their limits are a little further from progressive than they imagine. Nothing’s quite as funny as hypocrisy. Except perhaps slapstick. So we’ll fill the cast with clumsy congregants and strangely eccentric Church elders. It’ll be a hit.

I am split between two possible endings. On the one hand, I suspect that many a movie-goer would prefer an ending where our Mennonite pastor found a way to give her confused and judging congregation the figurative finger. And our not-so-young lovers can run off hand in hand across pristine fields of snow as the congregation continues its bickering and the credits roll.

But it’s Christmas and I am leaning towards a more redemptive ending. This one features a grand group scene of reconciliation. In this version, even the most dogmatic of the congregants shrug their shoulders and admit that love is greater than even the structures of the Mennonite Church. It’ll be a glorious final scene with oddballs, hipsters and elders coming together in the joy of a new Christmas.

Far-fetched? I don’t know. I know I’d watch it. I’d watch it year after year while baking weihnachts piroshki, wrapping up packages of homemade maraschino cherries, and nursing a sore throat stretched and raw from too much pretending I can sing along to the Messiah. And isn’t that the very reason that we all need a Mennonite Christmas movie? 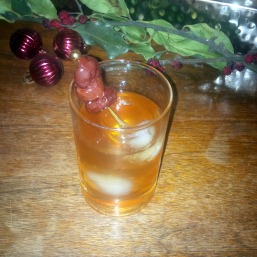 it, nonetheless. Called the Pastor’s Companion, it is heavy on the whiskey because, in my experience, Mennonite pastors have a surprising preference for the wry. It’s also a variation on the Old Fashioned.

Stir together the whiskey and the syrup. Pour over several cubes of ice and garnish with cherries. Offer a special toast as you drink this year, calling for Peace on Earth and Goodwill among Mennonites.

*holiday spice simple syrup: Combine 1/4 cup sugar, 1/4 cup water, a dash each of nutmeg and cloves, and an inch or two of a cinnamon stick in a small pot. Heat until it starts to boil. Cool completely and chill until ready to use in the cocktail. Strain.

One thought on “A Mennonite Christmas Movie”