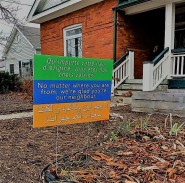 secret that Mennonite Churches have long been active in sponsoring and supporting refugees among us. This, and an appreciation for quilting as an art form, is one of the very few things that pretty much all of the different kinds of Mennonites can get behind. I say “pretty much” because with the number of subsects out there, there may be some I’m not aware of who are contrarian on this point. Nonetheless, that so many of us who disagree about so many other things come together over our obligation to help refugees is still quite something.

It might not seem like much. A lot of Mennonites take it for granted that we will support refugees based on our Christian faith. But just because we all read Bibles that include Matthew 25:34-36, there’s no reason to assume we would read it the same way. There are, apparently, quite a number of American Protestants who don’t feel a Christian commitment to refugees (probably some Canadians as well but we don’t do polls on things like that up here).And so I think it’s pretty special that we have something like a Mennonite consensus on our responsibility to shelter and support refugees.

I am under no illusion that this peccadillo of ours has anything to do with virtue; I’ve seen enough pain Mennos inflict on each other to know better than believe we have any corner whatsoever on the virtue market. Instead, I think a couple of our peculiarities have come together this once in a good way. In this case, the keys, I believe, are our abnormally long memory and our collective persecution complex.

Most North Americans tend to forget their immigrant ancestors within a generation or two. This helps to explain how we fail to identify personally with newcomers to our countries. Mennonites, however, remember way back to the sixteenth century. We don’t necessarily remember it correctly; in fact we have all sorts of memory distortions. But we definitely remember that we were migrants once. Even those “Swiss” Mennonites who came to the United States back before independence was even a glimmer in that country’s founding fathers’ eyes recall that their history was one of fleeing oppression.

I think it’s fair to say that even if we don’t know anything else about our history, we still know that our spiritual ancestors were forced into making the impossible choice between martyrdom and migration – leading to the famous Mennonite proverb:*

If you can’t be a martyr, you can always be a migrant.

Our (almost) 500 year old persecution complex also means that we fervently hold that all of the migrations in our history have been the result of religious persecution in one shape and form or another. This can require some mental gymnastics at times but nothing we can’t manage. Some of us can legitimately claim to have ancestors who were refugees. The rest of us – well, our ancestors would have been considered refugees if the governments at the time (and/or UNHCR) properly understood the hardships our people had suffered at the hands of a misunderstanding and cruel local population.

Well aware of our refugee past, the possibility of needing to move again is never too far from the back of our minds. I imagine that some of the Mennonites who have settled for awhile feel connected to the land under their feet but a lot of us are a people of diaspora, not really at home anywhere and surprisingly willing to up and move en masse with very little notice. We’re pretty much always looking at national borders and silently thinking up an escape plan.

We are, collectively, past and future refugees.

I know that’s a bit odd considering our fairly privileged position in North American society. There might be some unpleasant parts of this collective delusion. I’m not really in favour of the ways we rewrite history. But I guess it’s nice if it can bring out our kindness and generosity. It’s worthy of a cocktail, anyway.

There already exists a cocktail called the Asylum that dates back to prohibition. This one subs in maple syrup for grenadine. The Pernod (you can use a different pastis if you prefer) dominates so you might reduce that a bit and build up the gin if you prefer the herbaceousness to the anise flavour.

Pour the maple syrup into the bottom of an old fashioned glass. Slowly pour the pernod on top and then the gin. Add ice before stirring. Swish the ice around a bit and watch as it melts, the water slowly mixing with and transforming the pernod, like migrants crossing borders and slowly blending with those around them. Drink.

* I totally just made that up. It’s not really a Mennonite proverb. But it could be. And it should be.

One thought on “The Truth about Mennonites and Refugees”