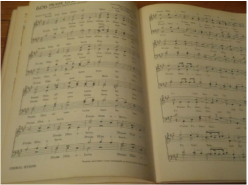 I wrote this back in 2015 in response to the launch of a new hymnal project. Since then, we’ve established a hymn-loving committee to consider all that needs to be considered in the update of a hymnal. I can only hope that they take my input into the process seriously.
The powers that be within the Mennosphere these days have recently announced that it is time for a new hymnal. This is big news and the Menno world is all abuzz with excitement. It’s a milestone that we pass only once a generation or so, and so it is met with a certain excited apprehension:

Yes, I know it’s just me wondering that last one but more people should. How are we supposed to compete on youtube with the Catholics when they have nuns singing drinking songs and we have nothing but barnyard hymn sings?

I’m sure I’m not the first person to notice that very few of our favorite Mennonite hymns make good drinking songs.* But, never one to shy away from a challenge, I am convinced that  with a little bit of imagination, we can find and salute a smattering of hymns for that special cocktail party/drunken brawl in your future. People from other faiths have already proposed events that bring together singing any old hymns while drinking beer. I believe we can up that game a bit. I want  hymns carefully chosen to fit the theme, like we’d do for a Sunday service, except in this case the theme’s drinking.  And, of course, we want to be a bit more participatory than at a standard Sunday service, and use bigger cups.

Remembering that drinking songs are not for those days of solitary drinking at home but rather for drinking in large parties, I suggest starting with O For a Thousand Tongues. Singing and tasting both. A thousand tongues will make for a grand drinking party. After that, who can forget that after all the walking through the valley of the shadow of death, there’s a big banquet with an overflowing cup? There are always two or three versions of The Lord is My Shepherd in the hymnal but no one has yet managed to keep the wine from dribbling over the edge. I think we need to work on that. Drink up. Now, hymn 304 is not as well known but given its name “Thou True Vine that Heals,” it also needs to be on the set list for this particular hymn sing as we meditate on the vines that produce so many lovely varietals for reds, whites, roses and cognacs.

While wine is the obvious king of the hymnsing here — the presumed contents of these overflowing cups and the topic of many a verse in communion hymns — with a little creative interpretation we can also support those who prefer spirits to wine and beer. Pour Down Thy Spirit has the most apropos title though I question the wisdom of chugging spirits, preferring to sip them in cocktails, myself. Let’s hope the next hymnal will have a song with more temperate drinking advice.

Now, if the party goes too long and the imbibing too enthusiastic, you might find some of your guests passed out in your garden. Time to break out in Sweetly Resting because who but a drunkard would consider a rifted rock to be a comfy place for a nap? Bring them inside, give them some coffee and take away their car keys. It’s ok to turn your head from them because if you’re singing Breathe on Me, the poor sod might take it literally and you don’t want to have to point out at this stage that theirs is definitely not the breath of God.

It goes without saying that all of these drinking songs need to be sung in four part harmony (unless your guests are Old Order or Old Colony Mennonites).  Your choice of instrumentation will depend upon the denomination of the Mennonites at the party. Organ, piano or a cappella — none of it matters to me but it might matter a lot to some of your guests. Consider yourself warned.

Today’s drink is called Four Part Harmony and it’s a pousse-cafe, which sounds a lot fancier and trickier than it really is. It’s sweet, so drink it after dinner as a dessert in preparation for choir practice. Or not. You do need a shot glass, a little spoon (one of your grandmother’s old coffee spoons will do) and four different liqueurs, one for each part.  You need to layer the cocktail with the heaviest liqueur on the bottom as the bass and then progressively lighter until you come to the soprano voice singing descant on top. If you don’t want to use my recipe, look up the densities of your own liqueurs and sing along at home. If the densities are too similar, the voices will blend together but that’s ok; singing in unison isn’t always a bad thing.

The shadows make it look like the bass and the tenor are blending together here but they really weren’t. Trust me.

*ok, I’m not really sure of anything of the kind – anyone out there thought about this before?

2 thoughts on “Top 6 Hymns that could be Drinking Songs”