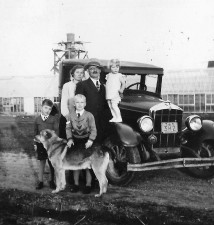 Imagine this: it’s 1941 and a Mennonite farm worker is sitting by his shortwave radio in Canada listening in rapt attention to the news coming out of Nazi Germany, contemplating immigration. Cut to Eastern Europe at approximately the same time, and see Heinrich Himmler touring the land of that farm worker’s youth and cooking up plans to re-make it as a Mennonite utopia called “Goth Land.”

Learning about the name Goth Land, I gotta say, was pretty much the only laugh to be had reading Ben Goossen’s history of Mennonites and German nationhood, Chosen Nation: Mennonites and Germany in a Global Era.* Lesson learned: don’t seek humour in academic books about Nazis. Or Mennonites.

I read Goossen’s book in part with the hopes of understanding my grandfather’s dilemma. He was that Mennonite farm worker back in scene one. It is hard to understand my Opa’s interest in Nazism, to imagine a time when Hitler might have seemed like a reasonable and good leader of a sensible political movement.

I’m pretty sure that my Opa never heard about the Goth Land plan but for one reason or another, he turned away from the call of the German fatherland in 1942. My mother says that once he learned more about what Hitler was really about, he realized that it wasn’t for them and he gave up his dream of moving to Germany.

But 1942 strikes me as pretty late. By that time, a lot about Nazism was already pretty evident, even for someone receiving his news via the German shortwave propaganda machine in the corner of his farmhouse kitchen. Which makes me wonder just what appealed to him about Nazi Germany and what, eventually, changed his mind.

Because my Opa died when I was only four years old,  I never had the chance to ask him about his politics myself. And if he explained his position to his sons or daughter, they have forgotten. My mother remembers only that he sat huddled by himself by his shortwave and that they all felt, for awhile, that they might move to Germany.

And they would have gone – she thinks – if they’d had enough money. So she thanks God for her parents’ poverty in the early years of her life. That kept her from having a Nazi father and a war-torn childhood.

Goossen’s book isn’t just about people like my Opa. In fact, relatively few of its pages are devoted to people like him – young men raised Mennonite in South Russia living through the 20s and 30s in Canada. Which is fair. That territory was traversed quite a number of years ago by Frank Epp though not sufficiently to answer my questions.

Chosen Nation is more broadly about the development of national identity: German identity and Mennonite identity. Its narrative begins in Prussia in the heady days of the nineteenth century when a few Mennonite progressives joined with non-Mennonite progressives in a dream of unifying disparate peoples across a certain patch of land in Northern Europe. The book then marches through the first half of the twentieth century when various Mennonites embraced a German nationalist identity wholeheartedly and/or wiggled their way into a new Mennonationalist category. It’s a book that pulls us out of the margins of twentieth-century history (despite one of the book’s endorsements calling us “a small, very unusual, and rather marginal religious group“) and strangely, gifts us something that feels an awful lot like a national history. Or at least a chapter of a national history. It’s not the most flattering chapter, to be sure, but it still feels like a national history – like there’s a distinct body of people whose history he is telling, even when the history involves deciding who belongs and who does not belong in that body.

Mennonites (and Anabaptists more generally) have a long history of breaking apart and coming together. We are often embarrassed about the “breaking apart” bits and like to gloss over those parts when we tell the story of our past. But Goossen turns that on its head by shining light on the dark side not of our tendency to come apart at the seams but at our coming together; our impulse to imagine ourselves a single people – kinda like a nation. Which – if we accept his argument – means that we get to be embarrassed about literally everything in our history.

Goossen’s not the first person to lob critiques at us for seeing (and embracing) Mennonite as an ethnic identity.  Evangelical Mennonites have been wringing their hands about Church borscht suppers ever since one of them noticed that their englander neighbours didn’t eat borscht. And Mennonites with a global outlook have long despaired at the inaccuracy of defining Mennonite by a particular Northern-European ethnicity when more Mennonites in the world don’t fit that definition than do. Goossen, however, might be the first to decry the Mennonite ethnic identity on the basis of it turning us all into Nazis.

There are a good number of reasons why Mennonites should not have been drawn to Nazism. In addition to basic Christian values of kindness to strangers and outsiders that should have kept us from participating in Nazi persecutions, our longstanding doctrine of  separation from the world – or in the words of the Schleitheim Confession, “from the wickedness which the devil planted in the world,” should, in retrospect, have been enough. But it wasn’t.

Nor was our historic peace position. Apparently those strongest on maintaining the peace position left Prussia before German unification and those who remained had already decided it irrelevant to the modern world long before Hitler’s rise to power.  The story was a little different for those who – like my Opa – were drawn to Hitler after having lived in Ukraine. He was one of many who dropped nonresistance during the Russian Revolution, a couple of generations after the Mennos who had remained in Germany.  And for arguably quite different reasons.

Finally, as a faith that values voluntary, adult decision-making, Anabaptism should have rung the death knell for any ideologies that associate virtue with race and genetic markers. But centuries of forced and voluntary isolationism had made us culturally distinct and bigoted. I have little doubt that my Opa held the same prevailing attitudes towards race as others in the 1920s and 30s, both Mennonite and not.

I expect that, most likely, Germany held an appeal to my grandfather both for pragmatic and emotional, nationalistic reasons. Like many a would-be immigrant, he sought economic opportunity, and his shortwave radio would have painted a picture of prosperity in interwar and wartime Germany. He and his family spoke Low German and High German both and could, perhaps, see themselves integrating more easily into a land where German was the official language than they could into Canada. These are pragmatic reasons.

I don’t know if he was also drawn to the idea of belonging to the German nation, and flattered at being a member of the “master race.” I expect the anti-communist rhetoric would have appealed to him since he had fought the Bolsheviks in Russia, whether or not he accepted the tale that Jews had orchestrated the revolution. I doubt if he knew of the symbolic role that Goossen found Mennonites playing in Nazi rhetoric, a role that placed us at the pinnacle of the Aryan peoples and as the good wandering people in direct opposition to the other peoples of diaspora – the Jews and the Roma.

He may, or may not have liked the Nazi valorization of military masculinity. Goossen’s book doesn’t talk much about gender, except for a chapter devoted to home life and demography. This is a shame – there’s a toxic masculinity that runs through Nazi ideology which may have been appealing to the young Mennonite men from Soviet lands who joined the German army so readily. We have had, through our history, our own version of patriarchy that sometimes aligns and sometimes clashes with the version around us. And, who knows? Maybe the Mennonite women also saw something empowering in the myth of the strong and fertile Teutonic woman. Or not. They might have ambivalent.

One of the greatest strengths of Goossen’s book is in its portrayal of ambivalence around Mennonite “Germanness.” National identity, it seems, was often donned and doffed at will. This is a portrait of Nazism at odds with the images of Nazis as portrayed by the pop culture of my youth: those in The Sound of Music, Hogan’s Heroes, or Raiders of the Last Ark. Everyone is certain of their identity and loyalty in pop culture. In Goossen’s account, collective identity is always contested and rarely certain.

In that regard, my Opa may have been fairly typical. By 1942, he had settled his identity crisis. When his little girl was bullied at school for being German, he advised her to tell the tormentors that she wasn’t German; she was Mennonite. This was a couple of years before it became a pragmatic declaration of identity for refugees seeking to escape both Germany and the Soviet Union and, if he thought it a pragmatic solution to my mother’s problems, he showed a sore misunderstanding of schoolyard dynamics.

I don’t know if that made him a Mennonationalist. Though he never flagged in his Church attendance, I’ve been led to believe that he never felt entirely comfortable in the larger Mennonite gemeinschaft either. For some, questions of ethnic and national identity might come easily. But for many, I think they may be complicated and thorny.  The stories I’ve heard of my Opa show him to have been a doting father, a frustrated engineer, a charitable and fair man, an orphan devoted to family, and a Mennonite drawn, for a time, to the lure of Nazism. For him – as for most of the people Goossen chronicles – national belonging didn’t matter much on a day to day basis. But every now and then, it did matter. And when it did, it had consequences. 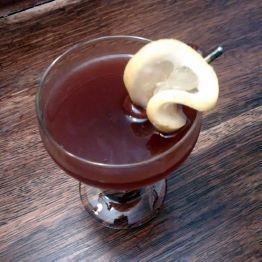 I don’t have access to a lot of German liqueurs but this cocktail brings together Prussian brandy and blackberry liqueur. Ideally, you should use Echte Kroatzbeere blackberry liqueur for German authenticity, but I won’t tell anyone if you cheat and use cassis instead. After all, nations are all just imagined communities and national cocktails can, therefore, just have imagined authenticity.

Shake the three ingredients in a cocktail shaker with ice. Serve in a cocktail glass. Drink in your kitchen, huddled around the radio.

*  Thanks to Princeton University Press for providing me with a review copy of Chosen Nation for the purposes of this blog post.