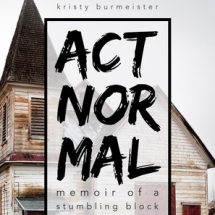 What a year it was. I remember it. I was living in Toronto – as I am now – and was busy trying to be a Mennonite SuperMom. Sort of.  I was still on hiatus from the Mennonite Church but baked zwieback from time to time.

I had almost, but not quite, given up on trying to find an academic job, my spouse was in school and we were raising a couple of kids who were somewhere between toddlerhood and middle childhood.  The youngest one had a penchant for singing Spice Girls songs. She was 4. It was cute.

In her memoir, Act Normal: Memoir of a Stumbling Block, Kristy Burmeister remembers 1999 a little differently.

A few years younger than me, Kristy graduated from high school in 1999.  She also acquired a stalker and lost her Church.

These were not things that happened to everyone in 1999.

The Church in question was a Mennonite Brethren congregation in Arkansas. And no, I didn’t know there were Mennos in Arkansas, either. I guess there are a few. Since Mennonite Brethren are typically more evangelical than the branch of Mennonites that I know best, I wasn’t all that surprised to learn that the Arkansas MB Church of Kristy’s youth sounded a whole lot like other fundamentalist Churches in the American South. Something I only know about from hearsay.

The religious culture didn’t seem particularly Mennonite, though Kristy’s father did refuse to own a gun. Which isn’t an exclusively Mennonite stance in my neck of the woods but it was apparently rare in Kristy’s corner of Arkansas.

There are a couple of other oddities about Kristy’s Church when viewed from my own Mennonite vantage point. I can be corrected on this one but I was not aware of the so-called evangelical “purity culture” having a huge impact on the Mennonite religious culture. Largely because the purity culture tactics generally require actually acknowledging the existence of sex.

Purity culture was a big part of Kristy’s religious adolescence. Even as a teenager, she both embraced the idea of a public vow of virginity until marriage and mocked the education they received towards this goal. The subtitle of the book derives from her impression that she was responsible, as a girl, for protecting boys from sexual temptation. That girls and young women were “stumbling blocks” for men. That’s an idea that’s older than the purity culture Kristy experienced and, again, not uniquely or particularly Mennonite. But it plays into her narrative as a justification for the Church abandoning Kristy when asked to choose between supporting her or her stalker.

The events that start the story and unhinge Kristy’s life and family start early in the summer, when an older man in the Church begins to bother her with his presence at Church events and such. It becomes a topic of gossip among the women of the congregation but little is done to intervene. Things escalate with break-ins to their house, the theft of some of Kristy’s things and veiled and peculiarly Old Testament threats of violence. Kristy and her family have no doubt that the same man is behind the break-ins and threats but the leaders of the congregation do doubt, and they stand behind the accused man instead of Kristy.

I knew all of this before starting the book – it is the starting point of the memoir, not the end. And I wasn’t surprised that the Church would stand by the man accused of stalking. Partly this is because of patriarchy but also because of the particularities of power. The older man in this case, as Kristy represented him, was a mentally-ill homeless man in his mid-forties. By many counts, he was a vulnerable person in the Church community.  He was the sort of person that the Church would have rightly felt it their duty to protect.

But that wasn’t the whole story.

With this crisis, fissures opened up between Kristy’s family and the community around them – fissures that were probably already there in some form or another but that widened. For one thing, the pastor and his family were suddenly outsiders again. As they had been in the town for no more than four years, this perhaps should not have been a surprise. Though Kristy and her sister clearly felt loved and embedded in the community, their father burst into a tirade against the “Ozark hillbillies” at the first hint of trouble. Which suggests that he was already well aware of their outsider status.

It’s a tricky power relationship – between pastor and leading families in a congregation.

The Church had grown while Kristy’s father was pastor. The long-term members – the ones who made up the core of the congregation and dominated the Church Council – would have been glad for that growth even as their lives were disrupted by the newly constant presence of strangers. While Kristy’s family needed little evidence to conclude that the person breaking into their house and leaving threatening notes was the one who had followed Kristy around, the Church leaders could likely see as many plausible suspects among the new strangers in their midst. Patriarchal purity culture entered into this as well; even while denying Kristy’s specific accusation, one of the Church members declared that the harassment wasn’t surprising because of Kristy’s cut-off shorts and attractive body.

The next fissure was about notions of health and healing. Back in 1999, most of us weren’t as aware of mental illness as we are now.  Though it made me cringe to read it, it would not have seemed odd for an eighteen-year-old girl to sum up her accusation with the equivalent of “Duh. He’s schizophrenic.” The congregant she spoke to grew angry at that statement, but not because it is stigmatizing of the mentally ill.  That might be the 2018 response and it would have some merit. This is why I cringed. Most people with schizophrenia do not stalk and threaten people; many more are victims themselves. I can’t help but read Kristy’s flippant use of the term and think of the friends and family I have known who have struggled with the disease that she paints more as evidence of guilt than as a cause of suffering. And it hurts.

But the congregant wasn’t angry because of any of that. She was angry because Kristy was doubting the efficacy of her efforts at faith healing.  I’ve heard of people believing this sort of thing – that illness of any kind was a sign of a failure of faith — but these sorts of judgements are usually subtler in my own experience. In this case, it meant that any suggestion of Kristy’s stalker being ill was read as a judgement on his faith – and on the people in the congregation who had prayed away the schizophrenia. It also proscribed a compassionate response that could have both kept Kristy safe and offered the man the social support he needed.

Kristy’s family wanted the man expelled from the congregation. This is certainly a time-honoured way for Mennonites to deal with our problems. But it is one that few progressive congregations endorse these days. Church communities are meant to both support their members and hold them accountable for their actions. That’s the promise of community anyway, and also its burden. And it doesn’t always go well. Within systems of patriarchy, we have sometimes twisted that into a way to hold women accountable for the sins of men.

Which doesn’t help anyone.

Years later, Kristy learned that the man who stalked her had become violent towards another woman after her. Who knows if a community that managed to blend support with  accountability could have prevented that. Not that it’s an enviable task to be such a community. I say this as someone who can’t even force herself to stay for potluck lunches, let alone commit to community enough to provide support for would-be stalkers while holding them accountability for misdeeds. And also, crucially, providing the support to keep potential victims safe.

This is all true whether or not the man was truly in a psychotic state at the time of the stalking. Later evidence suggests he may have been swept up in a particular 1999 strangeness that, though odd and scary, has no entry in the DSM-IV. It slipped under my radar at the time, but apparently Christian Reconstructionism had a bit of a heyday in 1999 anticipating that Y2K would break down civilization and usher in a new world order where certain unsavory Old Testament laws would return to punish girls like Kristy.  And if the Church was – as she learned – at least a bit infused with this ideology, then the problem was far bigger than one man and beyond the power of anti-psychotic drugs.

For Kristy, all of this — the stalking and the Church’s inability or unwillingness to provide the support that she needed — sent her life on a downward spiral that took years to be reversed. The memoir begins and ends with Kristy and her sister taking a return visit to the church in Arkansas about fifteen years later in the hopes of some kind of closure. The congregation that had grown while Kristy’s family lived there had shrunk again by the time she visited, broken by schism, another of our time-honoured traditions.

There’s no telling if Kristy’s stalking held significance for the rest of the congregation. They didn’t schism over that but over a sex scandal that came later. It’s often frustrating, when people are hurt in the Church and the Church seems to just go on, untouched. As if the congregation can just shrug its collective shoulders and move on. But it seems to have done that. The whole incident was, as far as we know, only transformative for Kristy and her family.

For Kristy, though, it was huge.

Kristy writes, late in the memoir, that when she started writing about her experiences, she realized that she was seeking validation. She wanted recognition from Christians that what happened to her was wrong. And there were many wrongs in her life. It was wrong that she was stalked.  It was wrong that her religious culture taught Kristy to assume responsibility for male bad behaviour. And it was wrong that the congregation failed to encircle her in the emotional support that she needed.

I will go further than that and declare that the congregation also wronged the man accused of stalking her. If he was in a psychotic state, he needed both treatment and a community to stand with him through his delusions while keeping him from endangering himself and others. And even if he wasn’t, the congregation wronged everyone by tolerating a pernicious theological panic that had no place in an Anabaptist congregation. 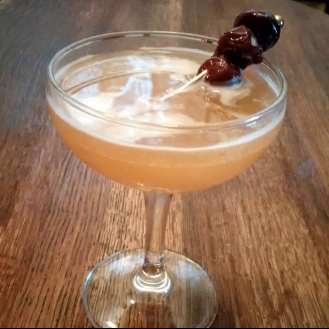 l, and her favorite drink as a young woman was pineapple juice and rum. That’s a little too sweet for my more mature taste buds so I have added some campari to balance the sweet with some bitter, and switched what was probably light rum to dark to provide a richer and more complex flavour profile.

Shake the ingredients with ice in a cocktail shaker. Strain and serve in a coupe glass or whatever you have. Garnish with some of those homemade maraschino cherries you just happen to have on hand. A wedge of pineapple would also probably work well.

One thought on “Acting Normal”